When you think about IT, a stale office environment might come to mind first. While Business IT management is our bread and butter, we’ve also partnered with the community on some unconventional and exciting IT projects. Most recently, we teamed up with some of the staff from the University of Louisville Hospital to support the virtual reality lab (VR Lab) at Cochran Elementary School. We worked directly with Shannon Putman, Teacher in Residence, who established the VR lab to support and enrich students’ learning experience.

Shannon’s innovative approach to teaching and learning is inspiring as we learned on a recent visit to the school. In the guest article below, Shannon gives us an inside look at the genesis of Cochran Elementary School’s VR Lab, how they are using VR learning, and what role VR learning plays in the future of education.

How Schools Can Start A Virtual Reality Lab

The VRL was a four-year process of trials and tribulations! About four years ago I became interested in VR when I was in the position of teaching Learning and Behavior Disorder (LBD) students who were in a resource setting. That means they were in the general education classroom for a certain amount of time and then received support from me either in the general education class or in a resource setting for a specific amount of time. Most of the students I worked with were male and tended to have struggles controlling their anger.

I have always worked hard my entire career to meet my students where they are. I do not change the way they learn, I change the way I teach. Being an athlete my entire life I always look for ways to work in sports, movement, competition, and overall fun into my classroom. So, I was doing that with my students and just “surfing the web” as they say, trying to find some sports-related information. I saw how Stanford University was using VR with its football team and I was hooked.

At the time, the popular brand Oculus was an independent company and they only had a developmental kit available that was geared towards developers. I bought one anyway and started the journey. Now, four years later, the rapid increase in the development of technology has afforded me the opportunity to create this lab.

The original VR device I bought was tethered to one computer, had no audio and low-quality graphics. Now, the standalone unit Oculus Go is interactive, affordable, easy to use, and fiscally possible. We still have four wired headsets and continue to work with those as well, but now the financial investment required is not as demanding as it once was. The knowledge required to use the devices is less as well. Before, you basically had to have significantly above average knowledge of computers and their languages to effectively use the devices. Now, however, you can get on Prime, order an Oculus Go, and it shows up the next day. It has been mind-blowing to watch how technology has progressed. The excitement I have for where it will go cannot be quantified in mere words alone! 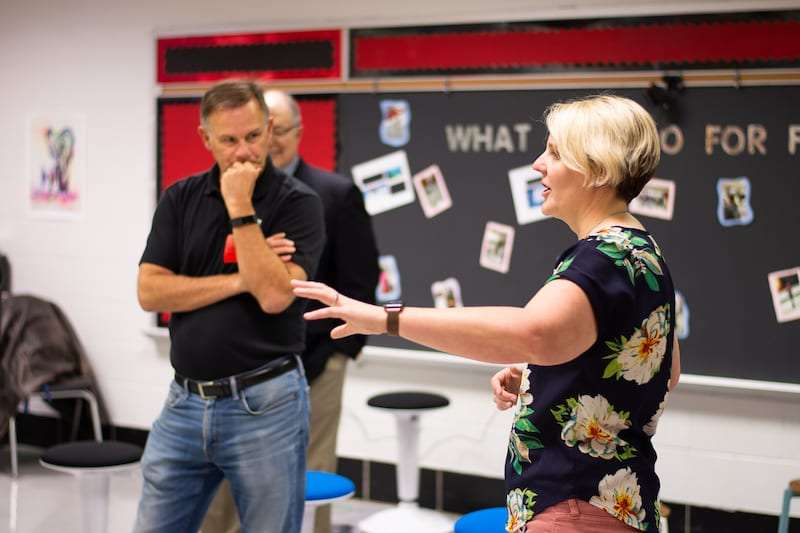 My vision for the VRL and VR learning is a fluid one that changes depending on the moment of the day! However, there is one common vision that I see unfolding. The research leads me to think that as this technology continues to improve, exposure to underserved populations will increase. I think the cost is the first major obstacle. I was beyond fortunate to be funded by the University of Louisville’s Nystrand Center and the Oxley Foundation. The majority of schools do not have that luxury, but as technology becomes more affordable, I see VR making a historical impact on education.

Students at Cochran Elementary have been using the VRL to improve in all areas, including outside of “academics.” Students have been using an app called “Virtual Speech” to practice and improve their public speaking skills. The student will put on the HMD and chose which environment they want to practice in, they can choose from up to five. They can load real-world documents into the app and use their controller to reference them and proceed through a slide show exactly like they would be required to in the “real world.” Once they complete their speech, they can play it back to listen for areas of improvements. They also receive a score in three different areas: eye contact, speaking pace, and hesitation words used. Students then record these scores and track their progress. Along with the practice of their speeches, they watch trainings on different aspects of public speaking. They learn what makes a good opening, how to keep the audience engaged, and how to close their speech in a memorable way.

My New Home is a unique and incredibly powerful experience where children have escaped in the middle of the night from danger and terror only to find themselves in an African refugee camp. Lead by a female guide not much older than they are, they learned, saw, and experienced what life in the camp was like. They even had to budget out their soap so they could trade it for food.

Students learned all about empathy when they tried “Notes on Blindness,” a VR journey into a world beyond sight. John Hull narrates audio diaries of his world as a blind man. As he talks, the user sees the world how he did. Images are dark, blurry, and fading. VR allowed students to truly feel what life is like for the visually impaired, to hear the leaves crunching behind them as someone walked, but to only see shadows and figments of them.

Beyond the educational value already seen at Cochran, VR has provided motivation for students at higher levels than previously reported. Students consistently requested time in the VRL and the behavior incidents have been on a decline since the opening of the lab. We have seen a 20% decrease in behavior incidents when VRL has been used as the motivator. 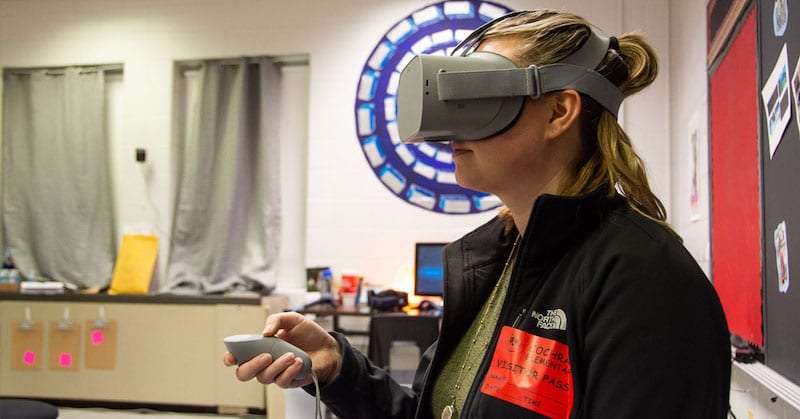 The Potential Of Virtual Reality In Education

I see VR impacting students’ learning in a myriad of ways. There is the most “obvious” way that usually jumps out to people – travel. We can take students anywhere with a Google image or an uploaded picture/video. We can take students from Louisville, who might never get outside the city limits, to museums, parks, and into the galaxy. But there is so much more we can do. We can create educational opportunities that will get students out of their seats, get them moving, and take us away from the old formula of “sit and get.” We can open up so many doors that were not just closed before but double bolt locked. We can take a student who is bound to a wheelchair and put them in the New York City Ballet Company.

The reason VR is so impactful is because it is not just videos. We call them experiences because that is what they truly are; you experience what is happening. It is all around you, your “real world” is completely shut out and the only option you have is to experience the VR world around you. A common phrase we hear when trying to teach kids empathy is to “walk a mile in their shoes” and while this is great advice, it is an incredibly difficult ask of a seven-year-old to try and imagine what life is like for someone else when they are just beginning to develop their own life. Now we can actually put them in someone else’s shoes. There are experiences that we have already started using to teach this exact concept.

It has already been used in clinical settings that show phenomenal potential for work with students with special needs. I see it progressing into all areas of education. Much like we at Cochran have created a VR Lab, and almost all schools now have computer labs, I see schools having VR Labs. A place where students can go and learn, interact, and, do not call me crazy, but have fun! I do not see VR replacing any type of instruction (maybe eventually, but not in my lifetime). Instead, I see it as the next step in student support. Another tool to add to our educator’s toolbox. 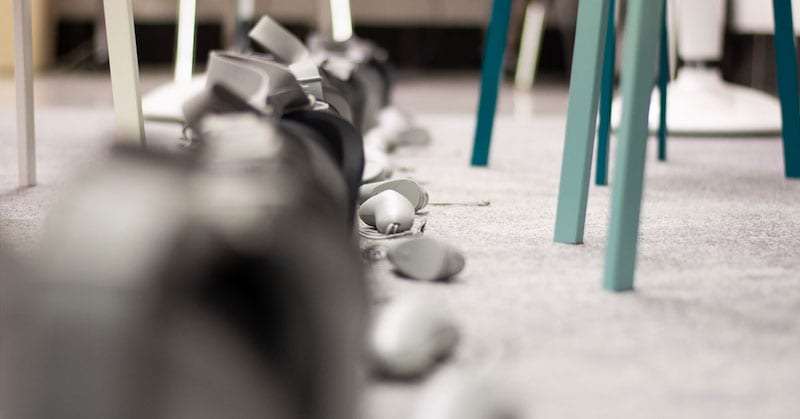 We have seen a massive increase in the use of tablets in educational use, and I see VR taking a similar journey. Not the same outcome, but the journey is alike. In the next 3-5 years, I hope to see VR Labs in as many schools as possible. I imagine walking into a school and seeing a VR Lab where entire classes can go in and travel to faraway places, learn about cultures first hand from the source, visit historical sites they would never be able to otherwise, and to virtually work with people around the globe to collaborate on projects to improve education and life in general. I imagine seeing some of those headsets in the actual classroom, being worked into the fold just like a computer or tablet. I also see VR filmmaking and the creation of other VR materials being a major component of the future of VR in education.

We have already started this here at Cochran with students creating an anti-bullying experience. The students set up the 360 camera in a chair like there was a student sitting in it. Then, they “bullied” the camera as if it was the student sitting there. Then, when the person puts the headset on and plays the video, they feel as if they are directly being bullied. It is incredibly impactful and truly feels like you are the target of the bullies. The students came up with this idea on their own and wanted people to know what it really felt like to be a student in a public school in 2019. There are so many avenues that VR can take us down, and I am excited to see and be a part of those journeys.

Stay up to date on all the exciting things going on at Advanced Business Solutions by visiting our blog!

IT Support Hurdles In The Municipal and Government Sectors

Advancing Louisville Through the Power of Technology
Scroll to top