Email spamming has become increasingly relevant as well as extremely convincing. Before opening those emails that flood your email inbox, consider the source and take an extra minute or two to examine the email closely. Email spammers are disguising themselves as familiar companies such as ADP. This tactic tricks us into thinking these are valuable sources and anything they are asking makes sense when it comes to giving away personal information. It is important to know the signs and the differences between the “real” emails and the “fake” emails to avoid exposure to phishing. Below is an example provided by Appriver- an anti-spam service protecting you from harmful emails. 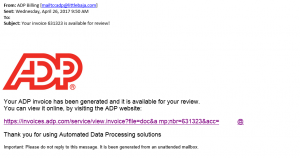 At first glance, this seems convincing and as real as others you may have received in the past. However, the “From” line should jump out at you as suspicious as this appears to be from ADP Billing, but the domain is adp@littlebaja.com which is not a domain of ADP. As a rule of thumb, companies will send from their own domains. So, if you receive an email with a domain that doesn’t seem quite right, don’t engage or click on any links within the email. This exposes you to harm. When receiving emails such as shown above, think about if it is an email you have received before or if it is one you would be expecting. If it is not, it is safe to say the emails are phishing attempts to victimize you.

In today’s world, we are moving fast and emails are no exception to that. We glance at things quickly without giving it a second look or thought. At ABS, we urge you to take the extra 30 seconds or minute to look at emails that may be familiar, but in reality are not. If there is any clue you are being exposed to these harmful emails and wish to have questions answered or have better protection put into place, reach out to us today!